Hannam’s second auction of the calendar year largely focused around a private consignment of watches, collected from the 1980s onwards and into the early 2000s, with many prized watches up for grabs a busy saleroom with over 50 in the room and nearly 600 online bidders battled for the time pieces, around 90% of the omegas found buyers with prices realised from £200 for a standard 1970s steel version upto £850 for a more unusual RAF issue example, a Rolex Prince from the 1930s made £5500 and a presentation Jaegar Le Coultre fetched £3400 under the hammer, clocks were also popular as ever, a pristine white boxed Atmos clock made £1400 and a 19th century French porcelain panelled clock made £1800, a single owner collection of sparrowbeak jugs from the 18th century, still highly collectable with all but a handful selling abroad, with prices between £100 and £450.
Two buffalo horn necklaces made £500 each, and going to the same buyer purchased a locally consigned ivory basket & cover for £3600, aswell as a Sino Tibetan buddha for £1700, Antique jewellery proved extremely popular, with £1500 being paid for a Diamond solitaire ring, £1500 for a Freshwater pearl ring & £3000 for a superbly engraved Italian 18ct gold box & cover, the samer buyer also snapping up a 22ct coin for £1800.
Chinese works of Art still showed strong prices, however it was the Japanese market that surprised, £3250 being paid for a large Japanese bronze of a male, £1700 for a Shibyama box & £1700 for a wonderful Japanese bronze catfish, a small twin handled Chinese censer exceeded its £300 to £500 estimate by making £1900, consigned from the same source a simply described hardwood bench made £3400 under the hammer, with prices depressed in recent sales for Chinese furniture, a surge of interest was found with over 70% of the hardwood finding buyers, a lovely Chinese soapstone figure made £5500 & a Yixing teapot and cover £3600.
Hannams Next Auction will feature a variety of European and Oriental Works of Art, consignments are invited at a commission rate of 5% + VAT with no other fees, all enquiries to Harry Hannam.


Back to Sale Highlights 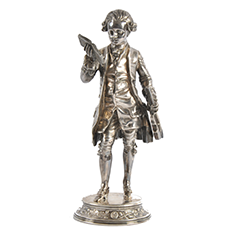 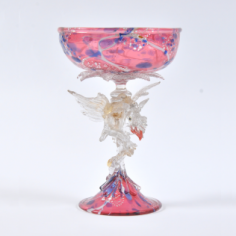