Hannam’s first sale of 2015 carried on from last year, with strong prices for Chinese & Japanese Works of Art, but also for all areas ‘Time’ related, a locally consigned wristwatch by Vacheron & Constantin, lacking its winder and with wear to the dial, sold for over ten times its auction estimate, £800-1200 was soon eclipsed when 7 phone lines contested for the prized piece, dating from the 1940s, before eventually selling to a delighted American Client for £9750, the same bidder also snapped up a French enamel pocket watch for £3800 and a carriage clock for £1500, with an unusual silvered metal case. Chinese bronzes were again snapped up by customers from around the globe, a large bronze figure of a Lama made £6000 and a smaller bronze figure of a buddha sold to a Chinese mainland buyer for £2800, a single owner collection of 18th Century English sparrowbeak jugs all found buyers, with prices from £110 for a modest and more commonly painted example with landscapes, to £460 for an unusual Meissen style jug and cover, a Ming ivory figure caused a stir, again cautiously estimated at £800-1200, a bidder secured the piece with a of £2600,  it has now found a new home in Paris, an 18th Century green jade censer sold for £7500 and from the same collection, an earlier Ming style russet jade buffalo made £4000 under the hammer, Hannam’s are inviting entries for their March 6th Auction, these include: Porcelain, silver, clocks, watches, pre 1947 carved ivory and rhinoceros horn, jade, selling commission is 10% plus VAT and items will be marketed worldwide to achieve the best prices possible, all enquiries to sales@hannamsauctioneers.com or telephone 01420 51188. 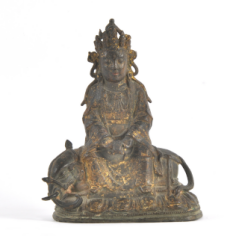